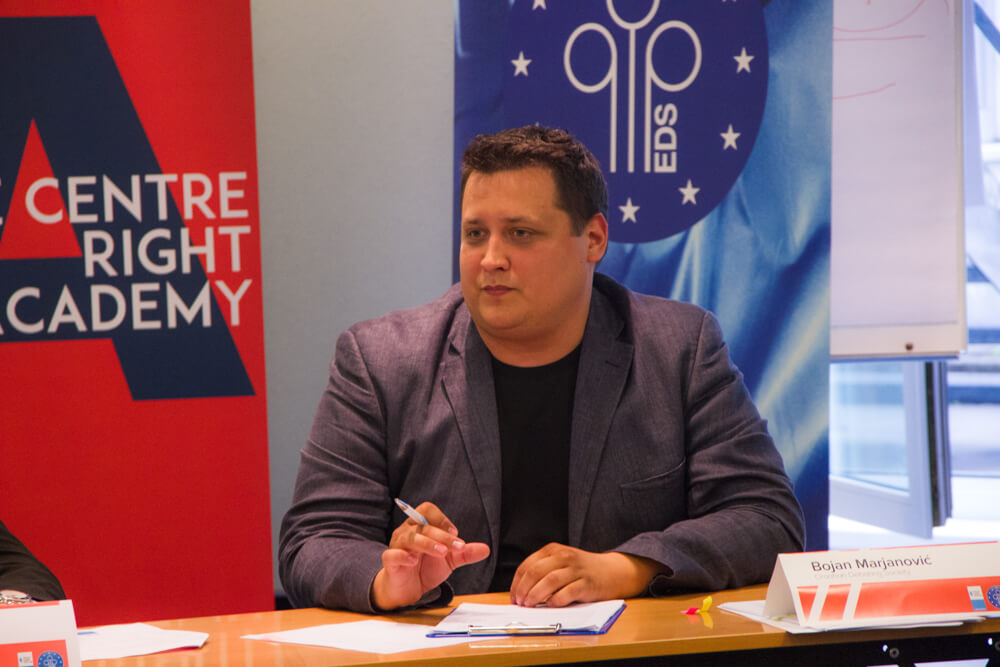 The very first Centre-Right Academy of EDS was hosted by SO HSS Croatia from the 12th to 15th May 2016 in Zagreb. The Academy pursued two principal goals: first, it focused on the communication of the values and policies of the centre-right political family to participants. Secondly, it emphasised the development of skills and knowledge needed for effective leadership and increasing youth political participation in communities. It was the first academy with emphasis on ideology, ideas and theoretical frameworks – the foundations of policymaking – by using the methodology of workshops, interactive participation and smaller discussion groups which might be difficult to achieve in regular events, and the academy turned into a great success.

Attendees were consequently offered by speakers, such as Roland Freudenstein, Policy Director at the Wilfried Martens Centre, a solid knowledge of the philosophical foundations of the centre-right, its divergence from other political ideologies, its historical development as a political movement and its position on important topics that have emerged over the past years. Additionally there were seminars focusing on different academic fields: one dedicated to theories of international relations and a centre-right approach to foreign- and security policy, and another one dedicated to macroeconomic theories, specifically elaborating on Hayekian economics and Keynesian economics respectively. The philosophical premises and ideas shared by the centre-right parties were further dissected when Mr Bojan Marjanović from Croatian Debating Society provided the participants with useful tools to analyse arguments presented in political speeches and debates and the logics behind them, with particular focus on countering right-wing populist arguments. The participants further had to write their own speeches and analyse each other’s ideas and rhetorics, e.g. on the topic of labour migration in the European Union.

Whilst EDS brings people of similar beliefs and perspectives together, much is still to be learned from and shared with one another. This is why participants additionally were granted the opportunity to exchange experiences and outstanding projects. With the help of experts such as Dr Petar Popović, Lecturer at the International University Libertas, and Ms Ivana Pukšec, Executive Director of Metis Consulting, attention was paid to soft skills that exemplify a young leader and how to make use of them in our organisations. The participants were provided with tools on project management and how organisations can work to envision and successfully complete their projects. Afterwards, they were able to put this in practice during workshops in small groups. At the same time, as a student organisation, EDS devoted some time to discussing the strategies employed by Member Organisations in student elections and the recruitment of new members, as well as the central topics on which different organisations focus to improve the welfare of students.