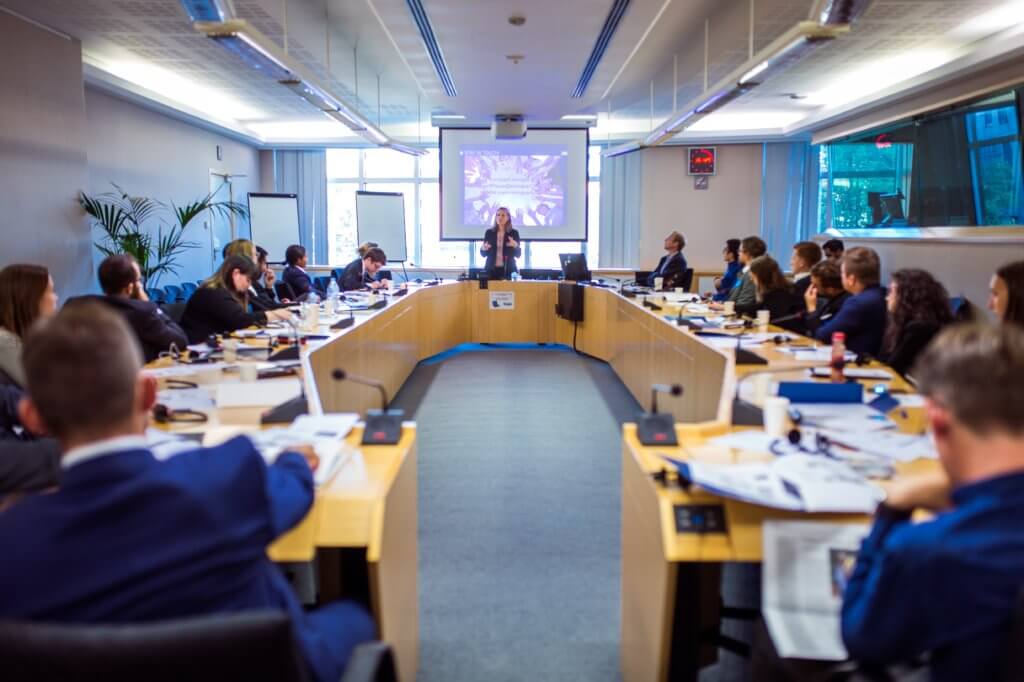 Over the past years, the official debating magazine of the European Democrat Students – BullsEye – has gone from strength to strength in providing a potent forum for centre-right students, politicians and figures from politics, academia, economy and society. To this end, the EDS Bureau invited the BullsEye Editorial Team to join them in Brussels, Belgium, for a Skills Workshop at the EPP Headquarters, alongside with the Co-Chairs of the Working Group and the Social Media Team. The programme, was divided into three parts: first, participants were offered an insight into the work of the European Union and its Communications Units in particular. The first part was thus formed by an introduction to the work of the Directorate General Communications of the European Parliament. After a brief tour of the Parliament, speakers such as Thibault Lesenécal and Delphine Collard delivered compelling presentations on the promotion of the EU’s legislative body on social media. On Saturday, EDS were further treated to an exclusive address by Margaritis Schinas, the Spokesperson of the European Commission, on the topic of “Communicating Europe”. Mr Schinas analysed the political state of affairs in Europe, the future priorities of the Commission and the challenge of promoting the EU’s work in times of growing Euroscepticism with EDS.

The Co-chairs were trained on all aspects of their work: from identifying policies to turning their ideas into motions and leading the working groups. They learnt to recognise relevant topics and stakeholders, and had a brainstorming session on ideas for motions. The Co-Chairs practised leading the working groups in a roleplay workshop and received tools to write background papers and motions as well as individual feedback. They also had a session with EPP Policy Adviser on EPP Policy. The workshops resulted in motions for the next event and work plans for the upcoming year.

The editors also underwent a series of training sessions designed to improve their skills and equip them with useful knowledge for the tasks ahead. To this end, EDS welcomed Alexandra Ivanov, former Chairwoman of FMSF Sweden and journalist at the Swedish daily Svenska Dagbladet, on Saturday for a session on “How To Write An Article”. During this unit, Ms Ivanov introduced participants to the requirements and different styles of journalistic writing, from comments to news reports and interviews. Later on the same day, the BullsEye team were further joined by Roland Freudenstein, Policy Director at the Wilfried-Martens-Centre for European Studies. Mr Freudenstein provided editors with valuable feedback on the articles they had produced for the first issue of BullsEye and suggestions to improve their writing in the future. Participants were further treated to an open discussion with Thomas Hermansson of the EDS Social Media Team who informed participants of the channels available at the organisation’s disposal and discussed opportunities to heighten the online presence of the magazine.

Furthermore, the Bureau also held its second Bureau Meeting of the working year 2016/17.