EDS statement regarding the increase of Member States’ budget in defence 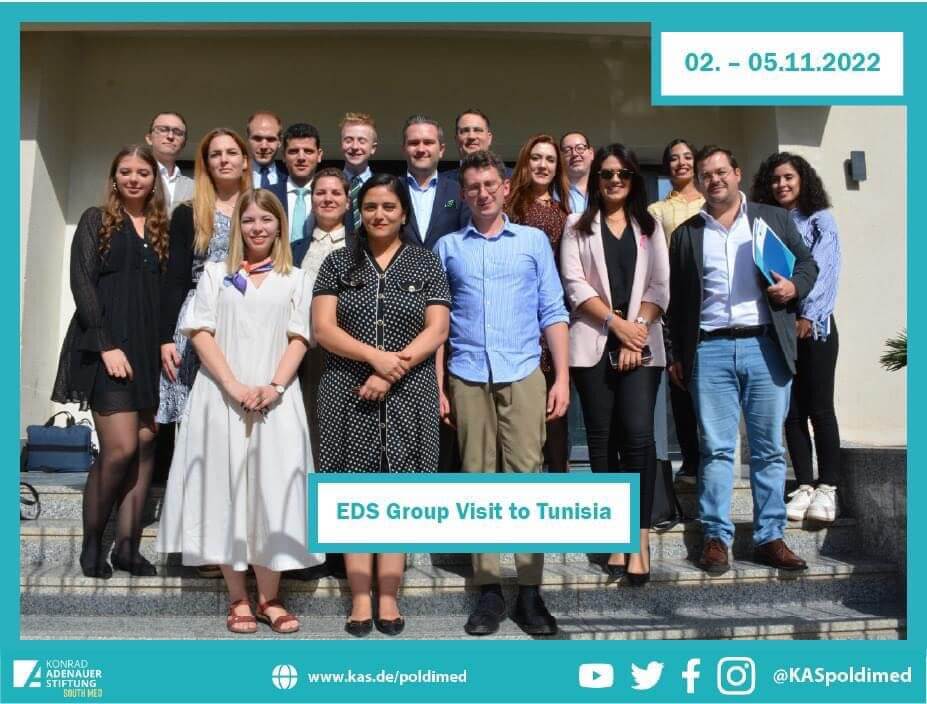 The EDS delegation was pleased to be on a study mission to Tunisia from 2nd to 5th November, thanks to the Regional KAS office for Euro-Mediterranean cooperation. The delegation was accompanied by Mr. Patrick Voller, Foreign Policy Adviser, European People ́s Party.

Our team had the extraordinary opportunity to speak with experts, opposition leaders, ambassadors and young leaders about this amazing North African country and its future.

Tunisia is now undergoing important and defining moments, elections are approaching in December and the International Monetary Fund has just completed their visit to aid the government’s finance’s which are on the verge of collapse.

We heard from opposition leaders and their views on why they have decided to boycott the upcoming elections. As we understood, the main reasons are the constitutional changes that occurred during the summer and the dissolution of the Parliament by the President’s decree.

New constitutional changes limit political parties from taking part in the election. In the beginning, it was explained by the president’s office that only non-members of Political parties could run for parliament. However, recent interpretations have begun to change now that elections are approaching. On the other hand, the IMF proposed much-needed reforms to the government, including rationalization of the public sector, reducing subsidies of various goods but also increasing government efficiency.

These measures could lead to better and much needed economic development and growth. The high unemployment rate is resulting in increased emigration, and many are risking their lives with illegal migration across the Mediterranean Sea. Without a doubt, improved living conditions would provide better opportunities for Tunisians and avoid the brain drain. Furthermore, it would also have a positive impact on the stability of the newly established democracy.

Our southern neighbor, ten years on from the revolution, is going through challenging times; financial difficulties and inflation are putting pressure on everyone, while the international community is worried about democracy and the direction which it has taken. During our discussions with young leaders, we stressed the importance of not becoming cynical regarding democracy and that even with the changes we are all facing, there is no better system for now. We, as part of the EPP, are standing firmly with them if they continue to aspire to democracy for their country. We discussed civic education and concepts of active citizenship, bearing in mind the low participation of Tunisians in recent elections.

In addition to discussions regarding Tunisia, our delegation had the unique opportunity to speak with experts from Libya who gave us insights regarding the current situation in their country. They presented their cooperation with the KAS office in drafting a monthly Libya briefing, which is distributed among the international partners, considering that most of them don’t have representation in Tripoli because of the ongoing conflict. The briefing proved to be significant. Unfortunately, warlords, tribes and foreign interference, for now, leave us without optimism regarding the unification of Libya and the stabilization of the country.

Tunisia has the opportunity to become a major leader in the African continent, which requires time and patience, while also becoming a developed and stable democracy that other African countries could follow. The other option is to go back to the era of dictatorship. The situation is far from perfect, and very challenging times lie ahead, but after this study mission, we believe in the resilience of the Tunisian people and its young leaders. It would be unfortunate to give up on democracy and freedom of speech. They fought so hard. We will start advocating for more cooperation with Tunisia and drafting more policies regarding the Mediterranean region and potential collaboration between universities.

During the study mission, we got familiar with migrations across Europe from Africa with experts from the International Centre for Migration Policy Development. Latest surveys show that a vast number of young people want to leave Tunisia, around 90% in age from 18 to 29 years old. Also, the Maltese Ambassador to Tunisia shared his thoughts on the situation and expressed his concerns about the trends.

We, as partners, want to help them to aspire to more, to lift them up after they might become tired and frustrated of trying. We sincerely believe that human rights are universal and by implementing them through institutions, the Tunisian people will be more prosperous than in any dictatorship.

The final evening in Tunisia was reserved for discussion with the Ukrainian ambassador, who was explaining the complex situation and Russian propaganda that exists in Tunisia.

Once again, we are thankful to the KAS office and its director, Dr Thomas Volk, for this opportunity and the speakers they provided us with during the event. We are sure it is just the beginning of our cooperation.