Caja Politica
We stand united with the British people 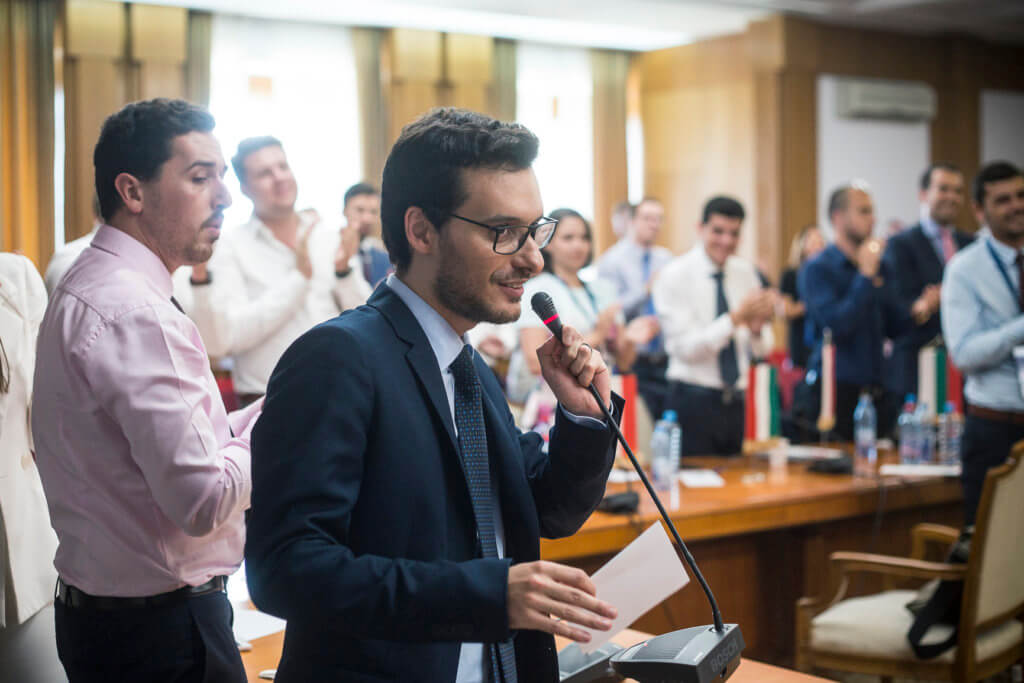 The Summer University was organised to close the current working year and to also to hold the Bureau elections. We chose the city of Bucharest because of its ties with the idea of the name of this event “The Future of Europe after the Elections”. The main sponsors of the event were EPP, KAS, RMDSZ and MIERT.

The exact dates of this event were from Wednesday 31st July until Sunday 4th  August. During these four days, we provided our more than 120 delegates with practical training and high-level panels. The official opening of the event was made with welcome dinner and speech by Oltean Csongor, President of MIERT. The delegates were addressed Virgilio Falco (EDS Chairman), Sara Juriks (Secretary-General) and Robert Kiss (Vice-Chairman). They introduced and welcomed the delegates. They introduced them to the programme for the upcoming days.

On Thursday 1st August, during the second day, we had a panel discussion, presentation of the membership applications, debate between the candidates for Vice-chairs and the working groups.

The day started with the panel that went under the theme “The future of Europe after the Elections“. The first panellist to tool the floor was Csaba Farago (Head of Foreign Affairs Szazadveg Foundation), followed by Lacziko Eniko (Secretary of State in the Department of International Relations). Csaba shared with the delegates the results of the last researches from the questionnaire with EU citizens about their opinion on questions concerning the European Union and their views. The questions and answers show positive opinions for the European Union. The second session was done by Mrs Eniko on the topic of minorities in the European Union countries. A wide discussion from the delegates followed the presentation.

After the presentations, we amended the Conference Resolution on the topic: “The future of Europe after the Elections” and delivered to the Council.

We also listened to the delegates from the two parties from Serbia and Luxembourg applying for full membership.

During the afternoon the working groups prepared the motions for the Council while the Bureau met for the last time of the Working Year 18/19.

The following day, Friday 2nd, the Council Meeting took place at the Palace of the Parliament, Bucharest. There was a keynote speech by Kelemen Hunor, President of UDMR. The Council heard to the Bureau Member reports for the year before starting the voting on the motions. In total, all motions passed, on topics such as Automatic mutual recognition of university degrees or Reform of The European Commission and European Parliament.  After the motion’s discussion, the Board was exonerated and the voting process to elect the new board began. Maia Mazurkiewicz from Poland was appointed Returning Officer during the electoral process. Carlo Giacomo Angrisano Girauta was the only candidate for Chairman and elected unanimously. For the eight Vice Chairmen positions ten candidates were casted: Benita Czirkl (Fidelitas, Hungary), Benjamin Welling( RCDS, Germany), Boyana Taneva (MGERB, Bulgaria), Ivan Botucharov ( YCGE, UK), Karlo Kolesar (HAZ, Croatia), Vasileios Kesidis (DAP NDFK, Greece), Valentina Podesta (GDS, Italy), Thomas Belligh (CDS, Belgium); Stephanie Cazimi (Belgium) and Juliana Naglmayr(AG, Austria) were not elected. Beppe Galea (Malta) was appointed as Secretary General.

On Saturday 3rd the new Board had its first meeting of the Working Year 19/20 to assess the future activities of the organisation and to prepare the Working Year. We appointed Francesco Sismondini as an Executive Officer for the working year 2019/2020.

One of the duties carried out that day was the appointment of the BullsEye Editorial Team, headed by Mattia Caniglia (Editor-in-Chief), Daniel Ackerman (Deputy Editor-in-Chief) and also 12 editors appointed after the interviews.

After the interviews of nineteen candidates, the Bureau appointed fifteen co-chairs for the three permanent Woking Groups (Higher Education and Research, Human Rights and Policies for Europe) and two temporary Working Groups (Sustainability and Energy and Gender Equality). In the evening the gala dinner was hosted in restaurant Pescarus.