European Solidarity in Times of Crisis 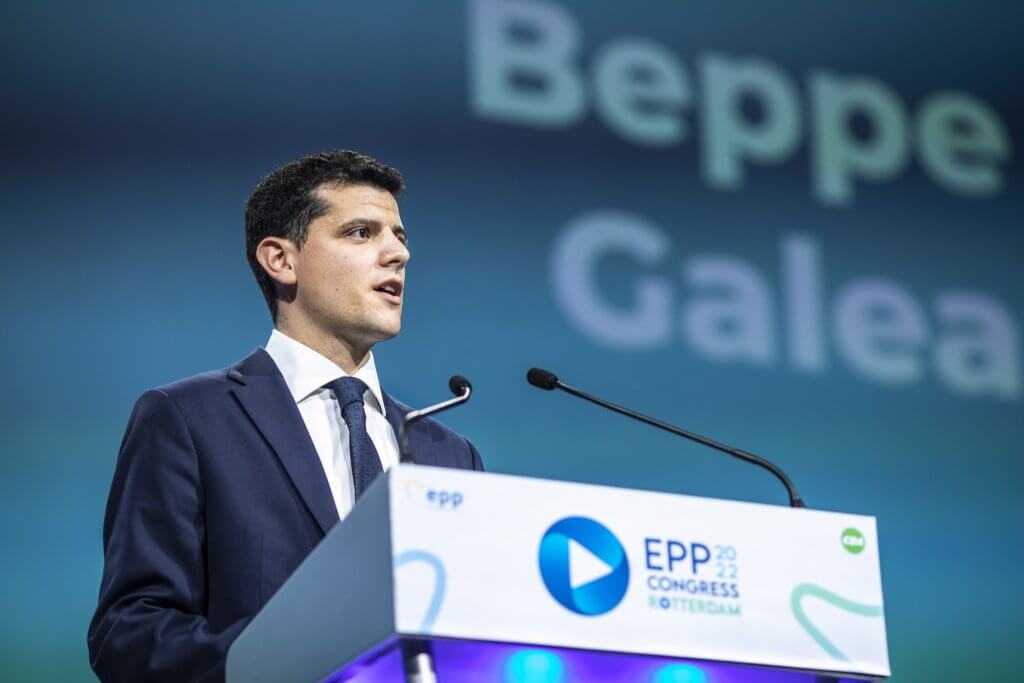 EDS took part in the EPP Congress with a large, active and committed delegation which brought energy, enthusiasm and new ideas to the event. The strong presence of so many young people from EDS was noticed by delegates and guests, received great feedback and uplifted the spirit of the event.

The programme started with the EPP Political Assembly on 30 May, where Chairman Beppe Galea spoke on behalf of EDS and presented our activities over the past 6 months. Chairman Galea also discussed our extensive support for Ukraine and introduced Iryna Shatohina who presented the latest situation in the country and praised EDS’s ongoing support.

The Assembly was followed by a dinner hosted by Christian Democratic Appeal (CDA), which featured Dutch musical performances and modern dance. The dinner and drinks reception gave EDS delegates opportunities to network with EPP leaders in a more informal setting.

On the 1st of June the delegation checked in to the Congress at Rotterdam Ahoy (which hosted Eurovision last year). The programme started with an event on the Western Balkans hosted by the Robert Schuman Institute where Secretary General Ivan Botoucharov spoke about the current situation, perspectives for the region and the importance of coordinated action between Western countries to counter the challenge of Russian and Chinese influence in the region.

EDS also hosted our own dedicated event which was prominently featured in the EPP programme. The event was opened by Chairman Beppe Galea who introduced our organisation, our proud history, our strong unity and our ambitions for the future. During the event participants heard from high-profile speakers including Antonio Lopez-Isturiz, Sir David Lidington (Deputy Prime Minster of the UK, 2016-19), Daniel Mitov MP (Bulgarian Foreign Minister 2014-17), and Stephen Hammond MP (UK Minister for Health 2018-19).

The Plenary session of the EPP Congress started in the afternoon with an opening speech by the CDA and by Donald Tusk.

We were honoured that Chairman Beppe Galea gave a powerful speech which received several ovations. In his rousing words Chairman Galea spoke about the importance of our family, which needs to stand united to make the most of the green and digital transformations, while at the same time tackling the challenges of the economic crisis and ongoing war. Chairman Galea also spoke about the vision, values and capabilities of the young generation to meet the challenges ahead and ensure stability, dignity and opportunities for all. His moving speech finished with these inspiring words: “My dear friends, the youth are tired of being defined as the “future leaders”. These last few years have been trying for young people. We saw our dreams shattered by the economic crisis, the virus, and now by the war. Yet, we will never surrender, we will never stop fighting for our values and we will prevail, because, my dear friends, WE are the EPP students.” Please see a video of the speech here.

During the afternoon and the morning of the next day EDS delegates voted in the elections for EPP President, Secretary General, Vice-Presidents and Treasurer. We would like to send our heartfelt gratitude to the outgoing leadership, as well as our warm congratulations to the new leadership team.

We look forward to bringing new energy and ideas from our united and increasingly strong and active EDS Family and to present a new generation to the EPP so that we can take the centre-right into a prosperous future.