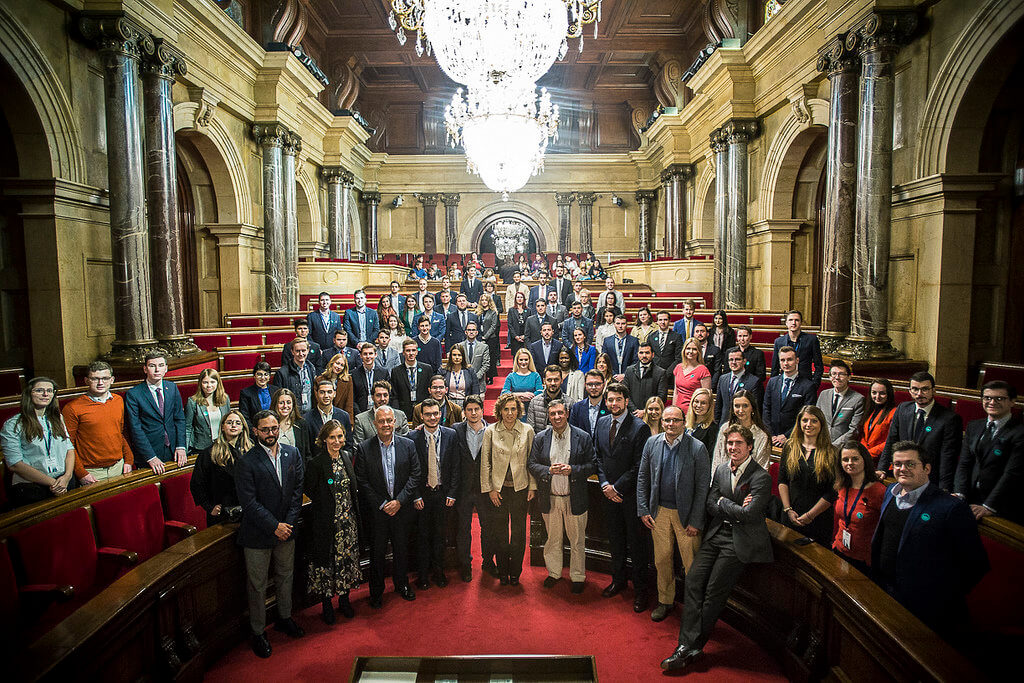 One hundred delegates from forty countries attended our WU, under the theme of “The dangers of nationalism in the 21st century”. The main goal of this event was to explain to the delegates the disinformation campaigns, the control of the media and of the schools that nationalists use to achieve their political objectives.

The first day, Thursday 7th, we received the delegates and we started with a working dinner “The crossroad of Europe: nationalism vs europeism”. During the dinner, Santi Fisas (MEP) and Irene Pardo (NNGG Catalonia Chairwoman) took the floor to explain the history of Catalonia since the promulgation of the Spanish Constitution. They both pointed out how manipulative the system nationalists created in Catalonia can get, creating a parallel reality thanks to their control of the media, the teachers and every single institution.

The second day, Friday 8th, we were hosted by the Catalan People’s Party Parliamentary Group in the Catalan Parliament. The topic of the discussion was “The September and October 2017 coup to democracy”, related to the facts that took place during these two months of 2017. The first speaker was Santi Rodríguez (regional MP), spokesperson of the Catalan People’s Party Parliamentary Group since 2012. He exposed all the fake news spread during his time of office and pointed out how opposition rights were suspended during September and October 2017. The Chairwoman of the Parliament decided to overrule every protocol from the Catalan Parliament Statutes therefore preventing the opposition from voting, or not counting their votes or even blending the norms on time notice for legislative initiatives.

After that, we welcomed the spokesperson of Partido Popular in the Spanish Congress, Dolors Montserrat. She is a Catalan politician, MP from the constituency of Barcelona province and was Health Minister in the Government of Prime Minister Rajoy from 2016 to 2018. Therefore, she saw first-hand and participated actively in the application of art.155 of the Spanish Constitution. She explained the delegates how the 27th of October 2017 Prime Minister Rajoy dismissed all the members of the regional Catalan Government.

Finally, we had an insight on the international perspective of the Catalan separatist movement from MP José Ramón García-Hernández, PP International Secretary. He explained the transnational fight for the dominion in values that populists and nationalists are delivering, proposed how to fight it and how to determine if one organization’s is assuming too much the messages of our political adversaries. He also pointed out how these movements are worldwide organized and do not hesitate to interfere in other countries to support their allies.

After that, in the Hotel Catalonia Plaza, Diego Gago (President of Nuevas Generaciones de España) delivered a speech welcoming the delegates and thanking them for coming to the most difficult region of Spain for Partido Popular. We then went to the Pueblo Español for lunch, which allowed the delegates to see a replica of the most recognizable cities of Spain, and where they could eat traditional food. After that the members of the Council had to vote on the Conference Resolution and make the first hearings for the member organizations applying for membership at EDS. Then the four working groups gathered to discuss the motions that were to be sent to the Council.

On Saturday 9th, the Council Meeting took place. An urgent motion was introduced by HS and NNGG on the recognition of Juan Guaidó as interim President of Venezuela. The agenda was followed, with many statutory amendments introduced by the MOs, among them the most important ones were the introduction of the figure the Deputy Secretary General and the introduction of the logos as an attachment to prevent the Bureau from changing the logos at any time. We also voted to raise the minimum Bureau Meetings held annually.

The Council was interrupted to have a workshop on Big Data, delivered by Ing. Lluis Montull (data analyst) and to host Mariano Gomá (President of Societat Civil Catalana 2016-2018). The latter explained his experience in organising the most massive political rally in the history of Catalonia, the 8th of October 2017, where all the constitutionalist parties asked for common sense and to stop the hostilities from the side of Puigdemont and his separatists allies.