The Western Balkans in the context of the current security and economic challenges since the start of the Russian war in Ukraine. 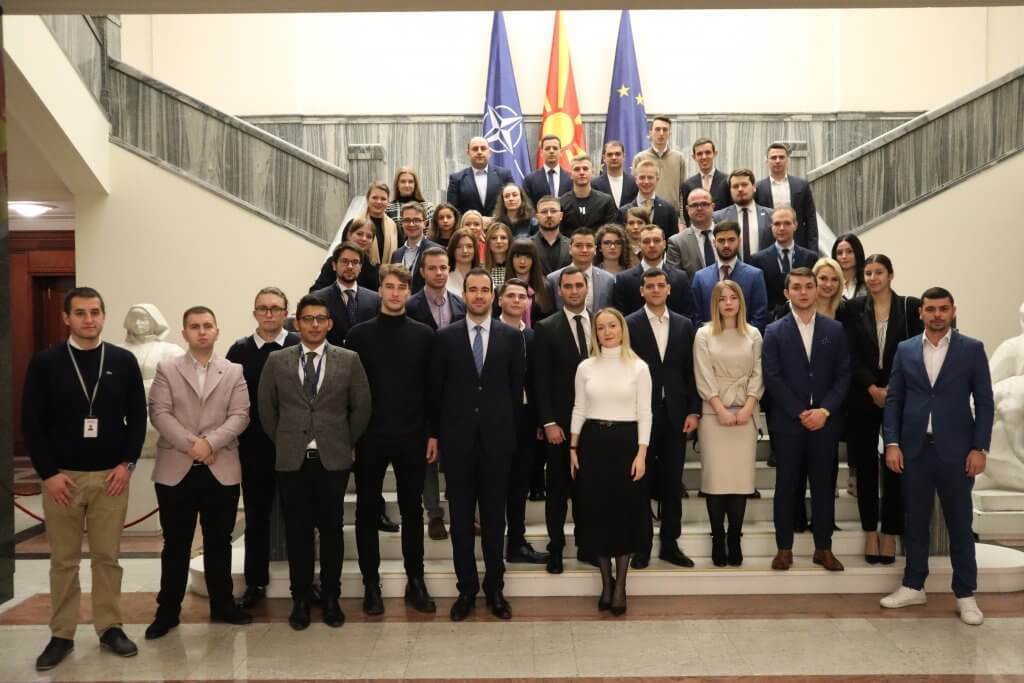 EDS has held a successful Council Meeting and Youth Political Academy in Skopje, North Macedonia, 01-04 December, hosted by YFU of VMRO-DPMNE and supported by KAS. The event was opened with welcome addresses by the main organizers of the event. Daniel Braun, the representative of the Konrad-Adenauer-Stiftung gave an address where he emphasized the unity of the youth of the European People’s Party during the great geopolitical challenges facing Europe. The vice-presidents of VMRO-DPMNE, Aleksandar Nikoloski and Timcho Mucunski, the Secretary General of the European Democrat Students, Ivan Botoucharov, as well as the President of the Youth Forces Union, Sergej Popov, gave introductory speeches, where they welcomed the delegates to Skopje and wished them a successful council meeting.

The working part started with a panel discussion where the speakers were the vice-presidents Nikoloski and Mucunski, the international secretary of VMRO-DPMNE, Stefan Andonovski and the member of the Executive Committee of the Youth Forces Union of VMRO-DPMNE, Todor Koneski. The panel was focused on the topic of the expansion of the European Union in the Western Balkans during the war in Ukraine. The panelists focused on the geopolitical effect of the conflict on the Western Balkans and how the countries’ actions could be more effective in order to speed up the process of integration. The panel discussion was followed by a large number of questions from the delegates, but also from the guests from the Youth Forces Union. After the panel, there was a cocktail opening of the event where the participants together with the panelists informally opened the event.

The second day began with a visit to the Assembly of the Republic of North Macedonia, where the participants first took part in the parliamentary tour of the assembly where they got to know the working areas of the people’s representatives in North Macedonia.

After the tour, the group had a meeting with the representatives of the Club of Young Deputies, Jovan Jauleski, Marija Petrushevska and Bojan Stojanoski, and the President of the Parliamentary Committee on Foreign Affairs, Antonio Miloshoski. The representatives from the Assembly held their presentations where they explained in detail what it is like to be part of the assembly and from a personal capacity presented their efforts towards the European integration of Macedonia.

A panel discussion was held in the central headquarters of VMRO-DPMNE, where the speakers were the President of EDS, Beppe Galea and the President of VMRO-DPMNE, Hristijan Mickoski. As the leaders of the two host organizations of the event, they commented on the direction in which their organizations are moving in order to guarantee the stability of the Western Balkans and Europe in times of challenges, the role of young people in making important decisions, and the expansion of the European Union.

After the end of the panel in which the president of VMRO-DPMNE, Hristijan Mickoski, participated, a panel discussion was organized on the topic: “The political, economic and energetic effects of the war in Ukraine on Europe”. The participants in this panel discussion were: Gordana Dimitrieska Kochoska, vice president of VMRO – DPMNE, Aleksandar Spasenovski, professor at the “Justinian First” Faculty of Law, Elena Markova Velinova, expert in the field of energetics, as well as Ivan Botoucharov, Secretary General of EDS. The panelists addressed the effects of the war in Ukraine in their areas of expertise. The panel discussion was followed by great interest, and the participants asked a number of questions for which they received substantial answers.

During the working day, EDS working groups were also organized. The organization itself consists of 4 working groups, i.e. working group for Gender Equality, Higher Education, Policies for Europe and Economy and Trade. Depending on their area, these working groups prepare the motions that are later voted on at the Council Meeting. After voting, the passed motions are submitted to the European Institutions.

The third day of the event was dedicated to the EDS Council Meeting. At the event itself, the motions were presented and voted by the working groups of EDS. The Youth Forces Union of VMRO-DPMNE presented an urgent motion that referred to the inhumane conditions faced by the Macedonian students, improvement of the student standard as well as the law on student meals. During the presentation of the urgent motion, the members of the council were shown a video, which referred to the inhumane conditions in the student dormitories in the Republic of Macedonia. The members of the council expressed strong disappointment regarding the conditions in which the Macedonian students are placed. The urgent motion was voted with unanimous support by the EDS council. The rest of the working day was spent reviewing the financial report of the organization, the technical details related to the next activities of the organization itself, as well as the presentation of the situations in their countries by the members of the council.

After the end of the EDS council meeting, a panel discussion was organized on the topic: “Politics in times of war, the role of the countries of the Western Balkans in the war in Ukraine”. The participants of the panel discussion were: Vladimir Gjorchev, former deputy in the assembly of the Republic of Macedonia, Vladimir Bozhinovski, professor at the “Justinian First” Faculty of Law, Victoria Trajkov, professor at the Faculty of Tourism and Management, as well as Irina Shahotina, VIce-Chair of EDS. The panelists condemned the Russian aggression in Ukraine and expressed the unreserved support that Macedonia gives to Ukraine. The panel discussion itself was followed with great interest by the members of the EDS council, a discussion that started a large number of questions and answers.