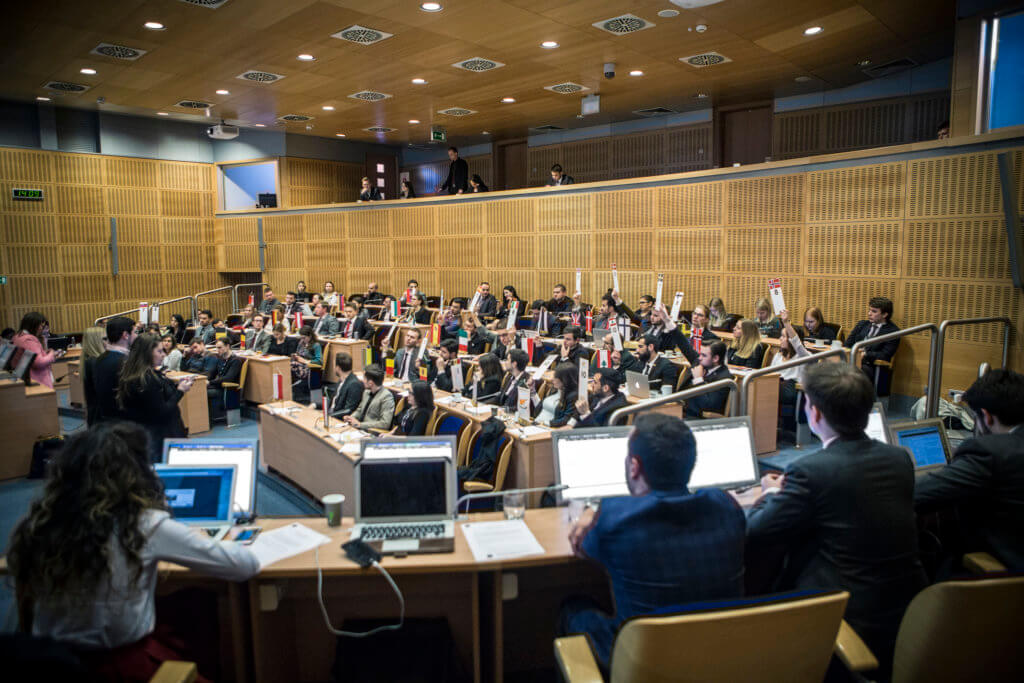 EDS Winter University 2018 was held in Krakow, Poland, from 21 to 25 February 2018 under the theme of “Europe and Young leaders of local communities”.

Keeping with EDS tradition, we started the year with our Winter University, this time in the historical and dynamic city of Kraków, Poland, together with the Konrad Adenauer Foundation in Poland, MEP Róża Thun and under the patronage of Jacek Krupa, the Marshal of the Małopolska Region. Our aim was to support PO youth before local elections planned for Autumn this year.

From February 21st until the 25th, we have provided knowledge and training to over one hundred young political representatives from every corner of the continent. The first day was spent at one of the oldest military airfields in Europe, the Muzeum Lotnictwa w Krakowie. We had the chance to have several interventions by experts such as accomplished diplomat Ryszard Schnepf, former Ambassador of Poland to Spain and the United States. He expressed to us his concerns on regards of the current Polish foreign policy, after having given to us a reflexive speech on the evolution of Polish diplomacy since the nineties to nowadays. EPP Vice President and Campaign Director Dura Murphy delivered his speech on the challenges standing before upcoming EP elections.

During the second day, we focused on crowdsourcing through a workshop carried out by the American consulting firm Ernst & Young. Following the workshop, we had a panel at Krakow’s Main Square on European diversity and whether or not it can be used to our advantage. Speakers were ranged from distinguished academics to both European and national politicians, like Igor Merheim-Eyre (International Republican Institute) or Agnieszka Pomaska (PO MP). Another debate followed suit, this time confronting diverse EDS members on the attractiveness of living in cities for young Europeans.

Throughout the third day, we started with a panel on the role of the EU in today’s global economy by Roland Freudenstein Policy (Director at the Wilfried Martens Centre), Prof. Killion Munyama (PO MP) and Maciej Surowiec (Government Affairs Manager at Microsoft). After then we hosted an exciting debate with Rafał Trzaskowski (EPP Vice President and Member of Parliament). In the evening, several high-level addresses took place in the Wieliczka mine. The first guest speaker was Radek Sikorski (Senior Fellow at Harvard University and former Minister of Foreign Affairs), after we had John Lynch (Chairman of the American Chamber of Commerce in Poland) and finally Elżbieta Bieńkowska, European Commissioner for EU Internal Market, Industry, Entrepreneurship & SMEs. Bieńkowska explained the future of the two European space agencies and warned the delegates on the risks of populism and nationalism.

During the Council Meeting the Conference Resolution, “Europe and Young Leaders of Local Communities”, was approved by an overwhelming majority.  The three permanent working groups made pass most of their motions. On Human Rights we had a rich debate on Venezuela, with the presence of a Venezuelan refugee came to Madrid. The outcome was a motion condemning the regime. Motions on Yemen and minorities of Europe also passed. The Policies for Europe working group made pass motions on the Digital Single Market, and on a harmonization of the corporate tax. Finally, the High Education working group passed a motion on the UNI-SET plan.

Last but not least, EDS has further grown up and welcomed new students organisations from Croatia (HAZ) and Belgium (CDS) as its observer and full members.

Share EDS with your friends
28
Feb 2018
By Beppe GaleaNews & UpdatesComments Off on Winter University 2018 // Krakow, Poland